St Patrick Parish welcomes all new parishioners. We are happy to have you worship with us. Please stop after Mass and introduce yourself to our staff. If you would like to register with our Parish, please complete the registration form, mail it to the Parish Office or drop it in the collection basket.

Prayer to Our Lady Of Guadalupe - Intercessor Of The Unborn

“Jesus, Mary and Joseph, I love you very much.
I beg you to spare the life of the unborn baby that I have
spiritually adopted who is in danger of abortion.”

Prayer for the Protection of the Unborn

Give us the grace... When the sacredness of life before birth is attacked, to stand up and proclaim that no one ever has the authority to destroy unborn life.

The Society of St. Vincent de Paul began in Paris, France, in 1833 when a young law student at the Sorbonne, Frédéric Ozanam, was challenged during a debate to demonstrate what he and his fellow Catholic students were personally doing to help the poor in Paris. Ozanam's reaction was immediate. Within weeks, Ozanam, at 20 years of age, and six of his peers formed the first "Conference of Charity." Under the conference, this group of seven men financed their works of charity out of their own pockets and from contributions of friends. They visited the poor in their homes, providing them with needed aid and assistance. At the prompting of Monsieur Emmanuel Bailly and Sister Rosalie Rendu, superior of a convent of the Daughters of Charity, Ozanam soon placed the conference under the patronage of St. Vincent de Paul who had spent his life in 16th century France serving the poor. Within a few years, the original group of seven grew to 600, spreading to 15 other cities and towns in France, numbering more than 2,000 members.

Twelve years later, in 1845, the Society of St. Vincent de Paul crossed the ocean to St. Louis, Missouri, where the first American conference was formed. Today, the Saint Vincent de Paul Society here at Saint Patrick Parish responds to the needs of our community in such areas as household issues, educational issues and even a small food pantry to help those in need sustain themselves in times of family struggles.

Other ministries are spotlighted on our Ministry Spotlights page.

“More than four thousand innocent lives are taken each day in this
land of the free and home of the brave,
whose lady holds high the torch of welcome to human life.”

EUCHARISTIC ADORATION
Mondays and Fridays
12:45 pm to 4:00 pm
(except on Holidays) 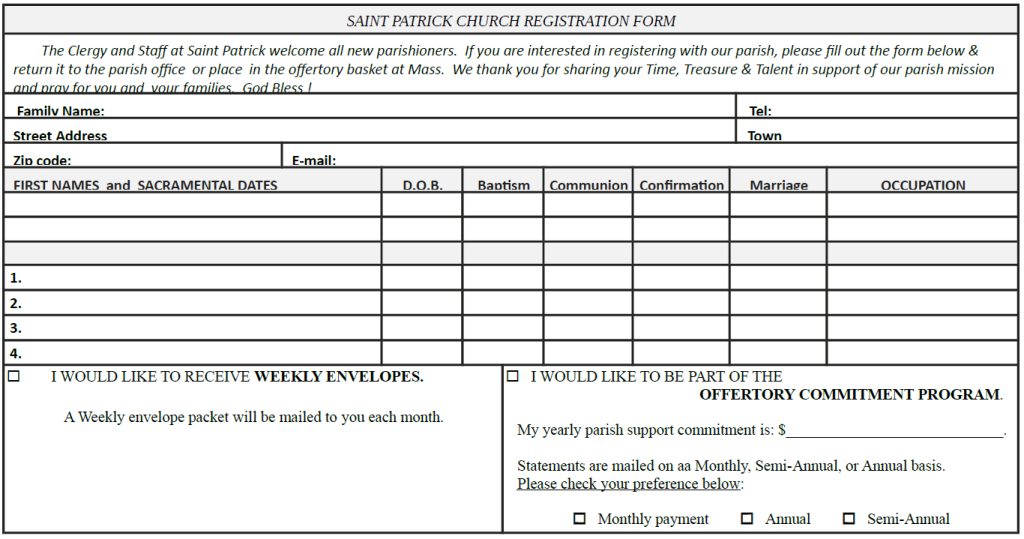 Every weekend Mass is recorded and then broadcast on Stoneham TV during the following week. Below are the times that Mass is aired on the Public Channel.

Each new cycle begins on Wednesday so the past Sunday's Mass will air for the first time on Wednesday.

St. Patrick's Parish has an app! Get information quickly on your smartphone with the WeConnect Parish App, available on iTunes and Google Play! Choose St. Patrick Parish when you start the app for the first time, and have access to our information in the palm of your hand!

Check out 365 Days with Mary provided by Our Sunday Visitor. Both apps are available to download free from the Apple App Store or Google Play.